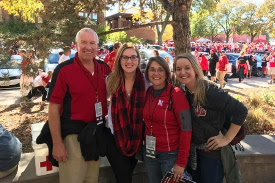 Dan Watermeier is the current State Senator representing District 1, comprised of Otoe, Johnson, Pawnee, Nemaha, and Richardson counties.  Senator Watermeier was elected to the District 1 seat in 2012, and reelected in 2016 by promising the voters of the District to govern according to his strong conservative principles.

A lifelong Nebraskan, Dan was born in Lincoln on May 29, 1961. He graduated from the University of Nebraska-Lincoln with a Bachelor’s of Science Degree in Agriculture in 1983. Dan worked as a Grain Logistician for Cargill, Inc. and as a farmer. He married Jean Ann Laessle on August 2nd, 1986 and has three grown daughters. The Watermeier's also enjoy spending time with their four grandchildren.